"Keyboard Player for Rock Band Max Webster". Since 2005, the Wellington Gallery has completed several sold out shows for Terry Watkinson. He is one of Canada's truly special artists, a musical talent and a supportive father. His daughter Chloe is a super talented singer who is often seen performing music with her Dad!
Artist Category Landscape & Seascape

“I was born (1940) and raised in Thunder Bay in the dramatic and rugged Lake Superior north shore country. I still spend my summers there, painting and photographing.

After high school I moved to Toronto to study Architecture at the University of Toronto for two years. I left the University to join a rock band, in the heady days of early rock, playing organ, then spent two years in Winnipeg living in a community of musicians, bikers, hippies and dancers, doing acid and studying Vedenta and the esoteric philosophy of Gurdjieff and Ouspensky.

Back in Toronto I joined a new rock band, Max Webster with Kim Mitchell. Over the next eight years we toured Canada, the United States and Europe, and recorded six gold and platinum records - a great experience, culminating in two headline shows at Maple Leaf Gardens. When Max broke up I returned to University of Toronto to earn a B.Sc. in Medical Illustration, and then to teach surgical illustration and perspective at U of T’s Biomedical Communications.

In all this time, I was painting and incorporating my life experiences into my art. From my childhood in Thunder Bay: a taste for the spectacular wilderness of Northern Ontario. From my architecture studies: structure, precision, draftsmanship, the science of perspective. From medical illustration: anatomy and discipline. From rock music as concert spectacle: rhythm, daring, the big gesture, and communication in my music and painting.

I do outsider art, in the sense that I developed my painting without the influence of the art establishment of teachers, critics, agents, and government grants. I consider my three major influences to be: The Canadian North, music and touring with a rock concert band, and the great city of Toronto with its architecture and vibrant social life. I am continually trying to bring a wild, experimental and unorthodox life onto my canvasses.

All my work is done in oil paints. I use Windsor and Newton's "Liquin" as a medium. My paintings are not varnished - this is supposed to be done not earlier than 6 months after completion of the ptg., and I usually turn work over long before that.

In order to protect their surface and give it a uniform lustre, I finish it with a thin coat of Liquin - this protects the paint from being rubbed off during cleaning. This final glaze is almost always clear, but occasionally coloured. It is part of the painting and cannot be removed as painting Varnishes such as Damar can.

The paintings could be varnished in the normal way once they have cured for 6 months, with a removable varnish.

Paintings of mine from 40 years ago show no deterioration" 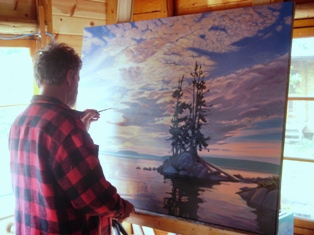 Terry Painting at his Cottage in Thunder Bay, 2005. 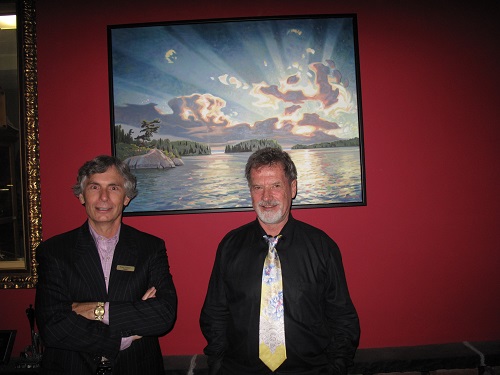