SPECIAL NOTE: ALL OF FLOYD KUPTANA'S ART OFFERED FOR SALE BY THE WELLINGON GALLERY WERE ACQUIRED DIRECTLY FROM THE ARTIST WHILE HE WAS ALIVE.  WE GUARANTEE 100% ORIGINAL  KUPTANA ART:) 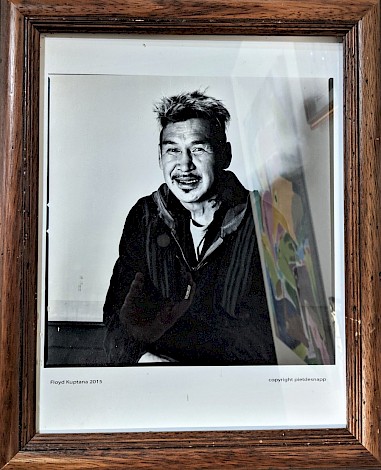 For Floyd Kuptana, painting and sculpting were ways to connect with his people, culture and traumatic roots. He died at age 57, but he packed an extraordinary life into the limited time he had.

By Robyn Grant-MoranSpecial to the Star

Kuptana was born in a settlement near the former Distant Early Warning Line station at Cape Parry, Northwest Territories, Canada and later moved with his family to nearby Paulatuk. He began his career by helping cousins Francis and Abraham Anghik Ruben to sand and polish their carvings, later working with sculptor and painter Bill Nasogaluak and as an apprentice to David Ruben Piqtoukun, older brother of Abraham and Francis. He produced his own work since leaving the apprenticeship in 1992, and passed away suddenly in May, 2021.  He is brother to carver Robert Kuptana.

Floyd Kuptana's sculptures of soapstone and other stone often feature shapes of both animal and human. Frequent imagery of transformation may be considered grotesque and include works of Sedna the Inuit goddess of the sea and marine animals. His work relates both to the Inuit shamanic beliefs and his own experiences.

After coming in contact in the late 2000s with Gallery Arcturus, a public art museum and education centre in Toronto, Kuptana began working with paint, depicting animals in bright colours on found materials such as wood and later on art board and canvas. Some of Kuptana's pieces enter the market via commercial galleries including a leading source of First Nations artwork in Toronto, Bay of Spirits. Most have been sold by the artist himself for private collections in Canada, the United States and other countries.

The piece known as "Self-portrait by Floyd Kuptana" was acquired in 2007 by Library and Archives Canada and appeared in a 2018 joint exhibit at the Glenbow art and history museum in Calgary.

Several works by Kuptana are in the permanent collection of Toronto contemporary art museum Gallery Arcturus. In 2018, an exhibit space on the gallery's second floor was created to showcase the artist's work in various media, as well as pieces created in collaboration with other artists.

Floyd Kuptana was an amazing sculptor. One of his pieces , entitled " Ballroom Dancer" was on the cover of Inuit  Art Quarterly in 2008: 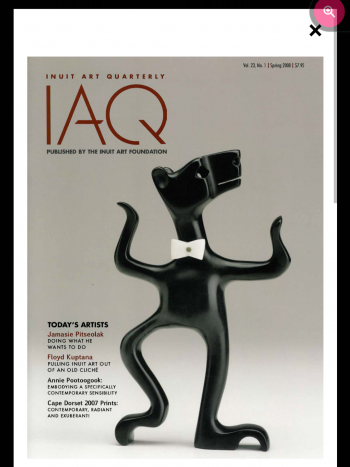 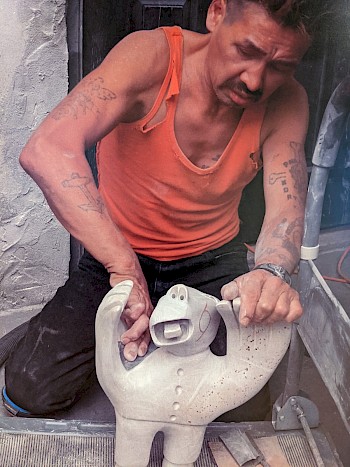 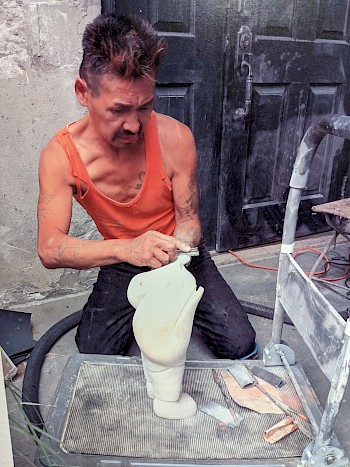 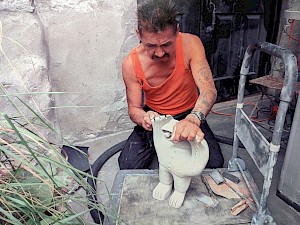 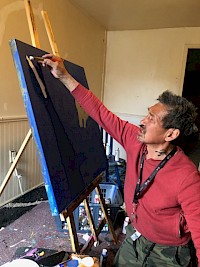 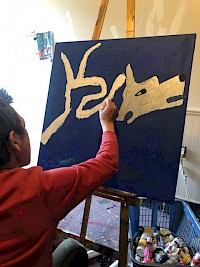 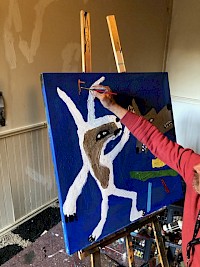 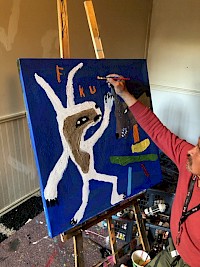 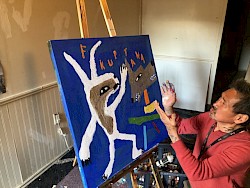 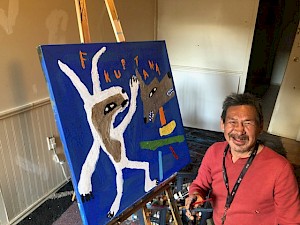 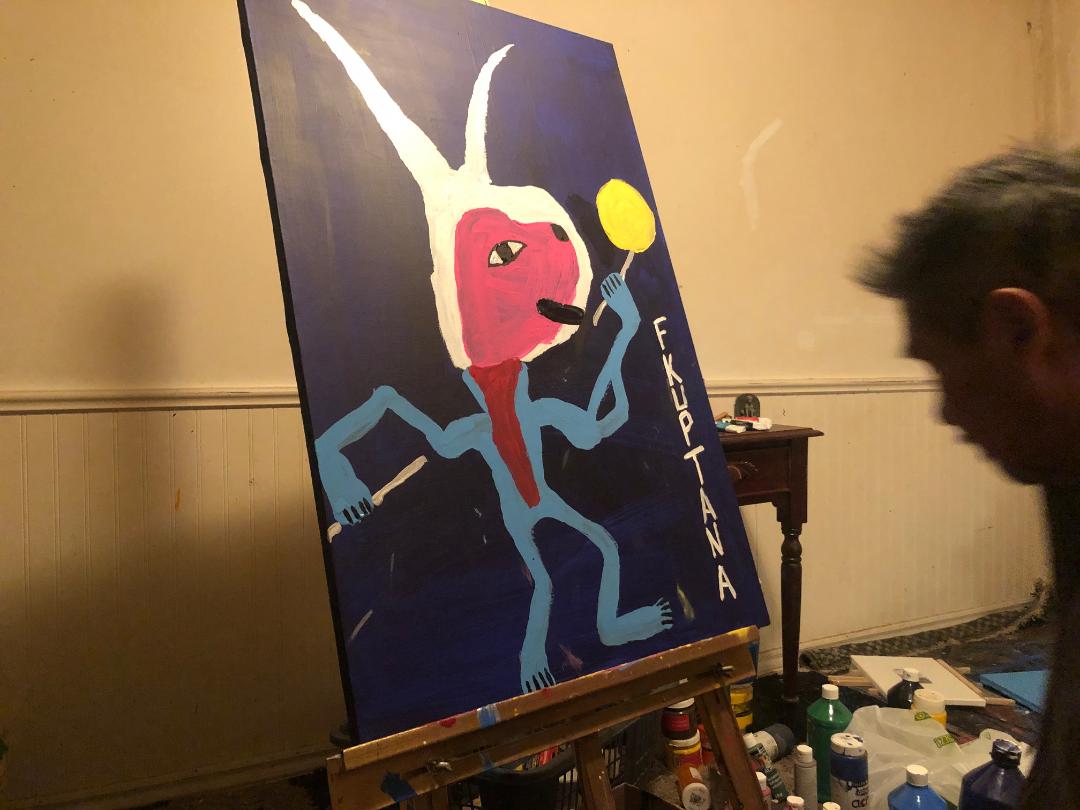 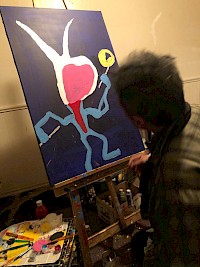 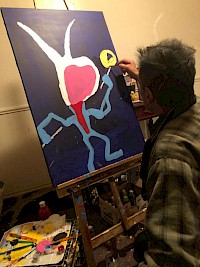 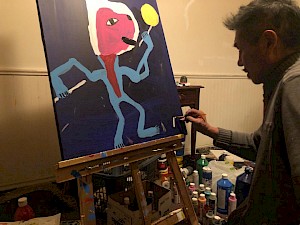 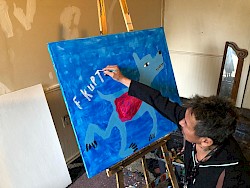 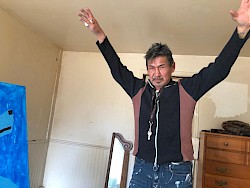 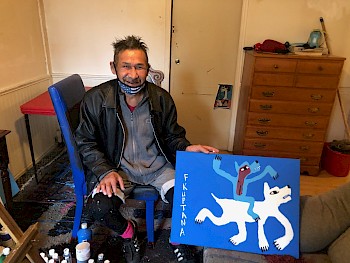 Floyd Kuptana completing his last painting on May 24, 2021. He was smiling and in good spirits. 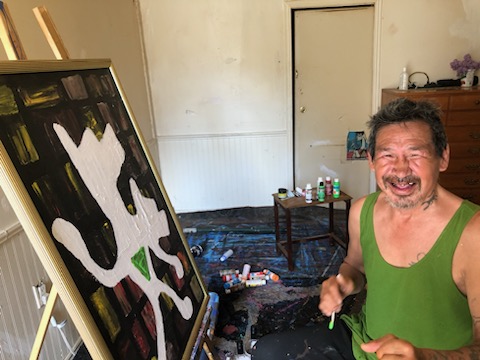 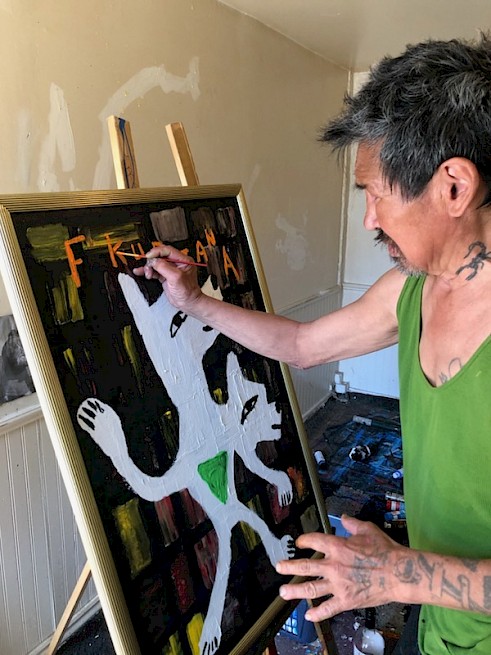 Traditionally constructed by the Inuit, inukshuk figures are made of piled stones or boulders constructed to communicate with humans throughout the Arctic. The structures have a practical purpose acting as a helper to food cache, possible dangers, navigational aids and hunting grounds. While stone figures resembling human forms are often referred to as inuksuk, such figures are actually known as inunnguaq. This particular inunnguaq sculpture points to the hunting ground, where the Inuit would hunt.

Rabbits are used as clan animals in some Native American cultures. Tribes with Rabbit Clans include the Hopi (whose Rabbit Clan is named Tapngyam or Taf-wungwa) and the Shawnee. The Kiowa tribe also had a Rabbit Society (called Kasowe) as one of their four ceremonial societies, whose members were all children and young teens. And the Rabbit Dance is one of the important social dances for the Native American tribes of the Northeast Woodlands and Northern Plains, which can be seen at some intertribal powwows today.

As the name suggests, Northern Wild Carrots are one of the most cold tolerant varieties available, coping with winter weather down to -10C when grown on lighter soils. The rich orange, cylindrical roots can be lifted late in the season or even over wintered in free draining conditions.

Many of the medicinal claims for the wild carrot point to its use in supporting the elimination system, stimulating the flow of urine, and to the removal of waste products by the kidneys. The seeds are anti-lithic, helping to prevent or clear out sand and gravel from the kidneys, and so are also useful in cases of gout. Like other plants in the carrot family, the seeds are also carminative, helping calm and settle the stomach.

Floyd Kuptana occasionally believed he was possessd by spirits, supernatural beings. In particular the demon Mahaha. This extremely rare, one of a kind, self portrait reflects the image of the demon.....how the artist , at times, pictured himself.

Supernatural beings accompany many Inuit myths, including: Mahaha, a demon that terrorizes the Arctic and tickles its victims to death; Ijiraat, shapeshifters that may change into any arctic animal but may not disguise their red eyes; Taqriaqsuit, shadow people who are rarely seen but often heard; Qallupilluk (or Qalupalik, see below), scaly, human-like creatures that snatch children into the sea; Inupasugjuk, giants who capture humans; and Tuniit, who are seen as simple-minded but extremely strong ancestors of the Inuit.

The Inuit believed that all things have a form of spirit or soul (in Inuktitut: anirniq meaning "breath"; plural anirniit), just like humans. These spirits are held to persist after death—a common belief present in most human societies.

Quviasukvik is the first day of the year according to the Inuit. The festival of the New Year is celebrated by the Inuit, Yupik, Aleut, Chukchi and the Iñupiat.The feast originally derives from traditional Inuit religion but in modern times, it has Christian influences.

The Quviasukvik festival starts on Christmas Eve and ends on January 7. This festival celebrates the coming of the new year and the sea goddess, Sedna and the transferring of spirits for good luck in the new year. During these days, many traditional customs are displayed. Due to Christian influences, Christmas was considered a new year to the Inuit.

The Northern Inuit Dog, along with its offshoot breed lines the Tamaskan dog, the British Timber dog and the Utonagan, is a breed of dog developed from a 1980s breeding project in the United Kingdom with the objective of producing a dog breed that resembles wolves.

Northern Inuit Dogs descend from dogs of unknown breed ancestry imported from North America in the 1980s that were crossed with Alaskan Malamutes, German Shepherds, Siberian Huskies and possibly Samoyeds; the intention of the breeding project was to create a dog of wolf-like appearance that could be kept as a companion dog and that could also be trained for other tasks.

An Amarok,  is a gigantic wolf in Inuit religion,

In one tale, a persecuted and physically stunted boy seeks to increase his strength. When he calls out to the lord of strength, an Amarok appears and wrestles him to the ground with its tail. This causes a number of small bones to fall from the boy's body. The Amarok tells the boy that the bones had prevented his growth; he instructs the boy to return daily in order to develop his strength. After several days of wrestling with the amarok, the boy is strong enough to overcome three large bears, thus gaining him the esteem of his village.

On Monday, May 24th, 2021, Floyd Kuptana completed this special painting. The Artist died the very next day, on May 25th from a Heart Attack. The artist had envisioned two headed wolves throughout his artistic career and it is only fitting that the subject matter in his last painting was that of the animal he frequently envisioned. A special person who passed away too soon!