During the period of Imperial Russia, Jews had two basic alternatives for joining the art world: One was to "hide or deny one's Jewish roots". The other alternative—the one that Chagall chose—was "to cherish and publicly express one's Jewish roots" by integrating them into his art. For Chagall, this was also his means of "self-assertion and an expression of principle."
Artist Category Abstract & Impressionist
Still Life & Figurative 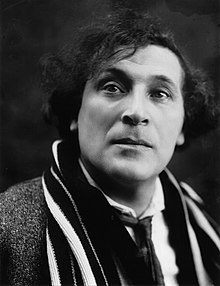 Born in modern-day Belarus, then part of the Russian Empire, he was of Belarusian Jewish origin. Before World War I, he travelled between Saint Petersburg, Paris, and Berlin. During this period he created his own mixture and style of modern art based on his idea of Eastern Europe and Jewish folk culture. He spent the wartime years in Soviet Belarus, becoming one of the country's most distinguished artists and a member of the modernist avant-garde, founding the Vitebsk Arts College before leaving again for Paris in 1923.

After returning to France he traveled throughout Europe and chose to live in the Côte d'Azur which by that time had become somewhat of an "artistic centre". Matisse lived near Saint-Paul-de-Vence, about seven miles west of Nice, while Picasso lived in Vallauris. Although they lived nearby and sometimes worked together, there was artistic rivalry between them as their work was so distinctly different, and they never became long-term friends. According to Picasso's mistress, Françoise Gilot, Picasso still had a great deal of respect for Chagall, and once told her,

When Matisse dies, Chagall will be the only painter left who understands what color is... His canvases are really painted, not just tossed together. Some of the last things he's done in Vence convince me that there's never been anybody since Renoir who has the feeling for light that Chagall has."

Le Grand Cirque is a famous painting from Marc Chagall which sold at auction for over $16 million USD.

This beautiful , original Painting, oil on canvas,  is a "re-creation" of Chagall's famous 1956 work of art completed by a talented, Canadian , world class, International Artist.

Ever since his childhood, when he had seen the acrobats in the streets of the Russian town of Vitebsk where he lived with his family, Chagall was fascinated by the theme of the circus, and often returned to this subject-matter in his oeuvre. The arrival of the circus signified the sudden invasion of the wondrous in to the rhythm of everyday life, the transformation of the humdrum into a form of art that left behind a lingering sensation of happiness and amazement. For Chagall, this had an allegorical connection with his own art and its performance, for he could never feel himself to be a painter alone but also a magician, actor and clown.

Chagall found an endless amount of pleasure in depicting the visual splendor of the circus. Throughout his career he drew great creative energy from watching the event, and some of his most important canvases are fantastic depictions that exaggerate the pageantry of the performance. “It’s a magic world, the circus,” Chagall once wrote, “an age-old game that is danced, and in which tears and smiles, the play of arms and legs take the form of great art….The circus is the performance that seems to me the most tragic. Throughout the centuries, it has been man’s most piercing cry in his search for entertainment and joy.  It often takes the form of lofty poetry. I seem to see a Don Quixote in search of an ideal, like that marvelous clown who wept and dreamed of human love.”

Les Amoureux  is a famous painting from Marc Chagall which sold at auction for over $28 million USD.

Les Amoureux is one of the greatest masterpieces of Chagall’s oeuvre, depicting the loves of his life: his childhood sweetheart Bella Rosenfeld and France, the country he made his home after the Russian Revolution. Entwined together in the night sky, surrounded by verdant, flowering bushes and a bird soaring through the clouds, the lovers fully evoke the devotion and tenderness so present in Chagall and Bella’s relationship. Writing about meeting Bella for the first time Chagall describes his certainty “Her silence is mine. Her eyes, mine. I feel she has known me always, my childhood, my present life, my future; as if she were watching over me, divining my innermost being, though this is the first time I have seen her. I know this is she, my wife. Her pale coloring, her eyes. How big and round and black they are! They are my eyes, my soul” (quoted in J. Baal-Teshuva, ed., Chagall, A Retrospective, New York, 1995, pp. 58-59).

Les Amoureux  was executed during Chagall’s second period in France, where he returned in 1923 and remained until his move to the United States during the Second World War.