"Worked with Andy Warhol . One of World's top Pop Artists". The ONLY American Artist to be honored with the Picasso Ring which is an annual award given to an artist the Picasso Academy feels has the spirit of Picasso.
Artist Category Pop Art
Still Life & Figurative

Steve Kaufman was Andy Warhol’s assistant during the prime of Warhol’s career .  The Wellington Gallery hosted the last International Art Exhibit for Steve Kaufman, before his untimely death in 2010. Each of the paintings offered for Sale are One of A Kind Originals, purchased and shipped directly from the Artist's Studio at Madison Ave., in Hollywood, California.

Kaufman's artwork hangs in the White House, the Smithsonian, as well as hundreds of other public and private collections around the world. He has made a name for himself in the art world and market and is internationally acclaimed. Kaufman has been featured on Fox TV and MTV, and was the winner of the Underground Artist of the Year award for creating 55 racial harmony murals. 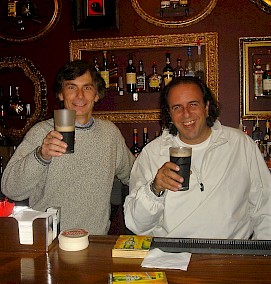 In early 2008, the Wellington Gallery Featured acclaimed Pop artist Steve Kaufman. This was Steve's last show outside of the United States before his sudden death in 2010. Steve produced art with Andy Warhol during the prime of Warhol's career.

“Elvis Comeback” is the only, one of a kind painting, produced by Steve Kaufman which features images from Elvis Presley's Legendary 1968 comeback special.

Back in late 1968, Elvis Presley had been out of the spotlight for a while — unusual for the King of Rock ‘n’ Roll. That all changed with the TV show that became known as The ’68 Comeback Special, in which he was dressed head to toe in black leather, thrilled an intimate and viewers nationwide and reclaimed his throne in a single night.

The painting was purchased directly from Steve by Gallery owner, Emil Simon, and shipped to the Wellington Gallery from Kaufman's Hollywood Studio.

Watch some highlights of the music special in the video below:)

This One of a Kind Original, is the only "Cool Look" James Dean artwork ever produced by Steve Kaufman..

James Byron Dean (February 8, 1931 – September 30, 1955) was an American actor from Indiana. He is remembered as a cultural icon of teenage disillusionment and social estrangement, as expressed in the title of his most celebrated film, Rebel Without a Cause (1955), in which he starred as troubled teenager Jim Stark. The other two roles that defined his stardom were loner Cal Trask in East of Eden (1955) and surly ranch hand Jett Rink in Giant (1956).

After his death in a car crash, Dean became the first actor to receive a posthumous Academy Award nomination for Best Actor, and remains the only actor to have had two posthumous acting nominations. In 1999, the American Film Institute ranked him the 18th best male movie star of Golden Age Hollywood in AFI's 100 Years...100 Starslist.

"Vogue" is a song by American singer Madonna from her second soundtrack album I'm Breathless (1990). It was released as the first single from the album on March 27, 1990, by Sire Records. Madonna was inspired by vogue dancers and choreographers Jose Gutierez Xtravaganza and Luis Xtravaganza from the Harlem "House Ball" community, the origin of the dance form, and they introduced "Vogueing" to her at the Sound Factory club in New York City. "Vogue" is an upbeat house song which set trends in dance music in the 1990s with strong influences of 1970s disco within its composition. "Vogue" also contains a spoken section, in which Madonna name-checks various golden-era Hollywood celebrities. Lyrically, the song is about enjoying oneself on the dance floor no matter who one is, and it contains a theme of escapism.

Critically, "Vogue" has been met with appreciation ever since its release; reviewers have praised its anthemic nature and listed it as one of Madonna's career highlights. Commercially, the song remains one of Madonna's biggest international hits, topping the charts in over 30 countries, including Australia, Canada, Japan, the United Kingdom, and the United States. It became the world's best-selling single of 1990, selling over six million copies.